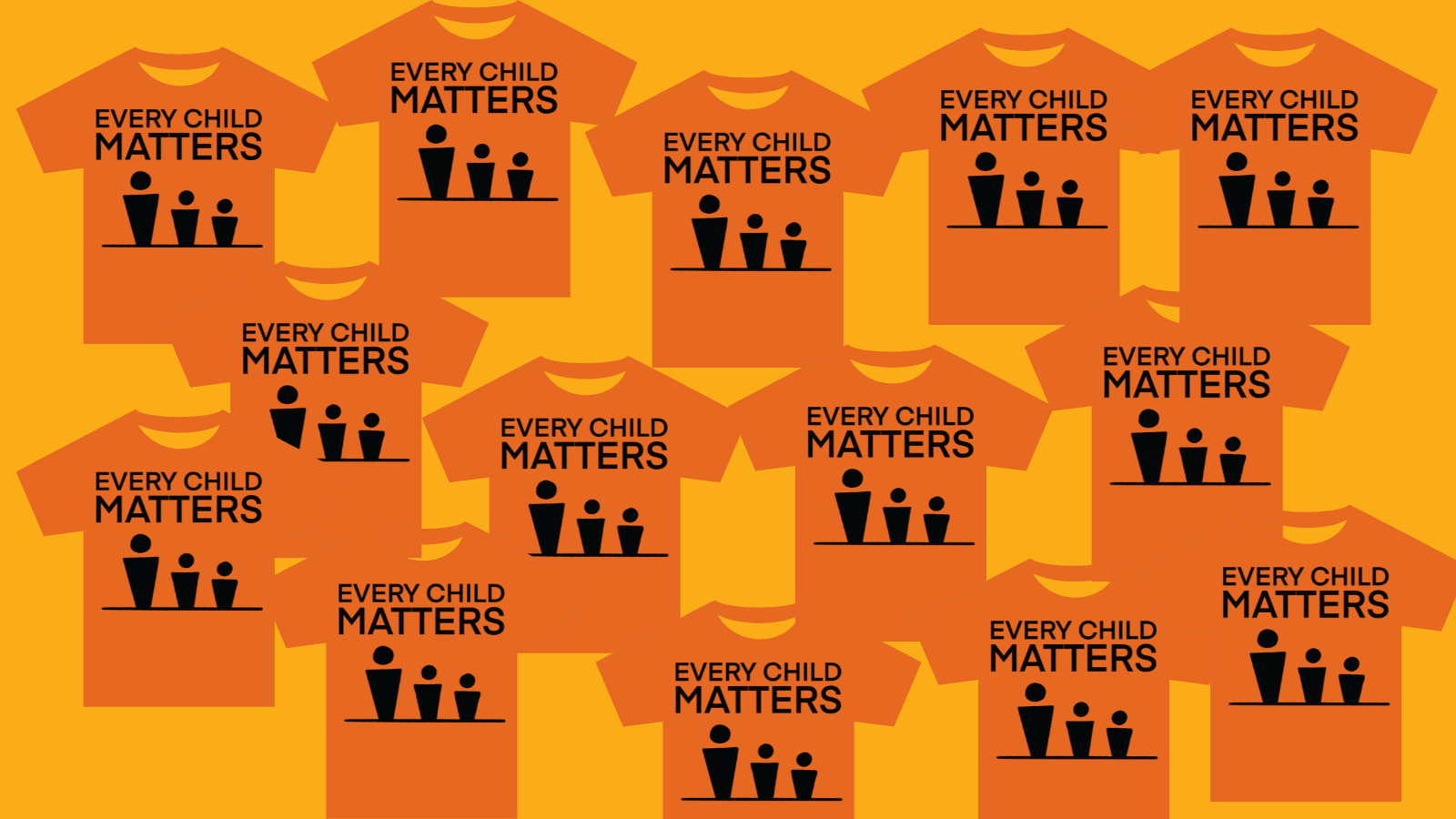 Orange Shirt Day began with Phyllis Webstad’s (a woman of the Secwepemc Nation) telling of her experience within the Indian Residential School (IRS) system and having her orange shirt, a gift from her grandmother, taken away the day she was brought there. Read more about Phyllis’ story here.

Under the guise of education, the canadian government and various christian entities forced children, like Phyllis, to attend these “schools” to eradicate their First Nation, Métis, and Inuit identities. The painful experience of being separated from their families and being taught to reject their Indigenous cultures was intensified by high rates of physical, sexual, verbal, and emotional abuse. Many Indigenous children did not make it home after entering the IRS system due to fatal abuses, high rates of serious illnesses left untreated, and children’s attempts to escape back to their homes. Until the rediscovery of nearly 215 Tk’emlúps te Secwépemc children on the grounds of the former Kamloops residential school, the truth about this shameful piece of canadian history was swept under the rug. Though survivors and Indigenous communities have been speaking about these gravesites, the discoveries of 1,381 children this year alone has been due to the advocacy and persistent efforts of survivors.

On September 30th, 2022, canada’s second National Day for Truth and Reconciliation, we are called to remember all Indigenous children lost to the IRS and the harm still experienced today through intergenerational trauma. Just like in Phyllis’ story, Indigenous People(s) throughout canada have endured systemic barriers across all levels of government and colonial institutions.

Recognizing the intergenerational impact of these barriers, the SFSS reaffirms our collective responsibility to educate ourselves and make efforts to learn the truth about the violence that occurred at these schools. We recognize the legacies of colonialism in the systems which surround us all. As a Student Society, we ensure our responsibility to:

We wholeheartedly support reconciliation efforts brought forward by Indigenous students, faculty, staff, and community members. We acknowledge the complex feelings held by our Indigenous community members towards the passing of Queen Elizabeth II and stand in solidarity with all who have experienced colonial violence at the hands of the crown.

Finally, we thank all Indigenous students, advocates, land and water defenders who continue to do the labour of leading decolonization efforts at SFU and beyond.