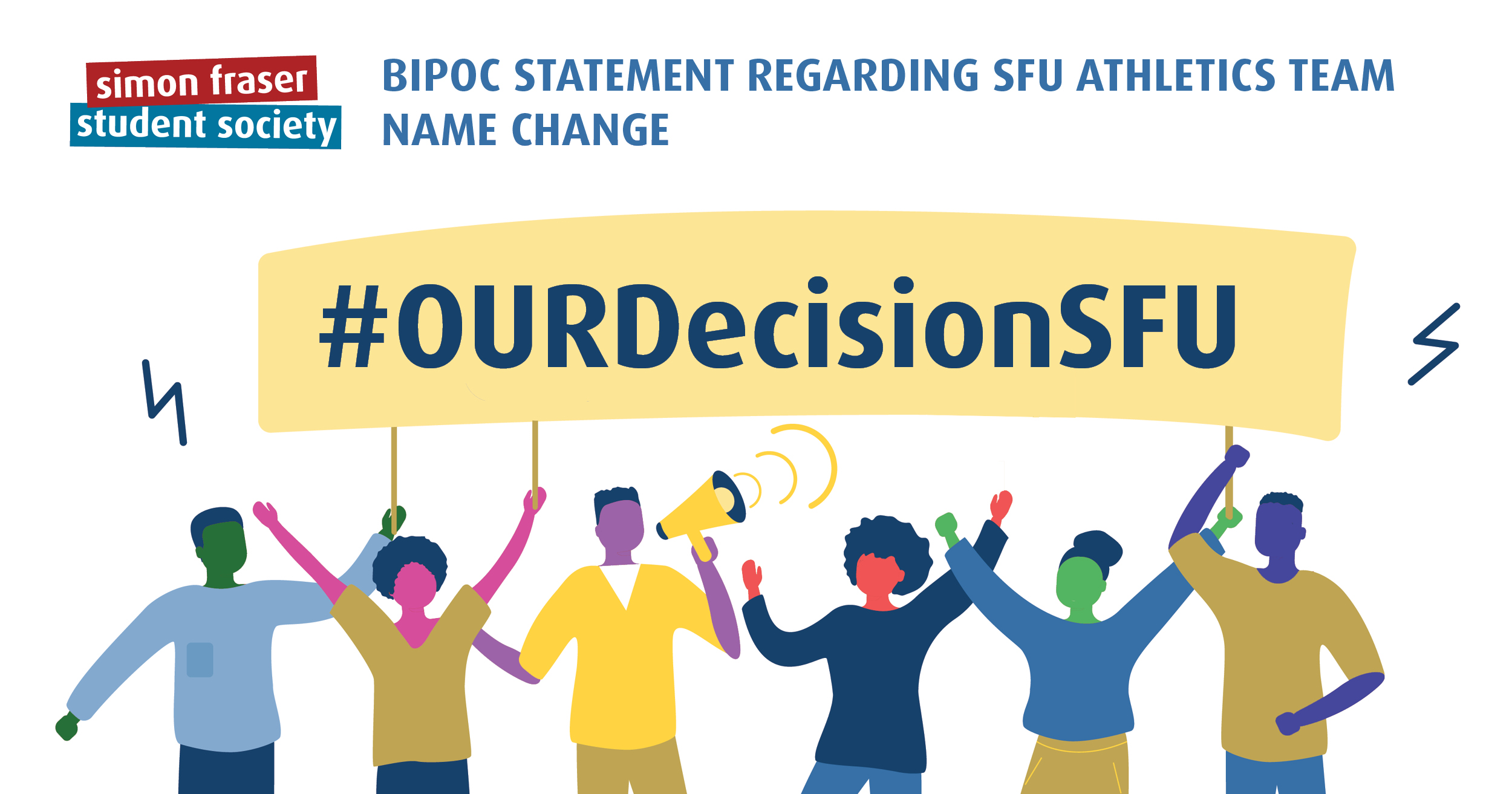 We are proud to see that years of Black student activism, with support from allies, has led to the change in the team name of the SFU Athletics Department away from the ‘Clan’. However, we are deeply concerned by the institutional racism at play throughout this process. It is clear that Black athletes and allies have vocalized concerns with the team name for years, and they were gaslighted and marginalized throughout. Former SFU President Andrew Petter’s statement on the Athletics name change is disingenuous, as noting the lack of willingness to acknowledge Ku Klux Klan connotations, racism, and Black athletes’ experiences. The SFSS BIPOC committee has reached out to current President Joy Johnson highlighting our concerns and calls to action. Here was her response on September 30, 2020:

“I acknowledge the points you make in your letter. Particularly, I want to affirm that Black student-athletes were pivotal in advancing the need to change our varsity athletics name. We are grateful for their advocacy, and acknowledge the significant impact as well as the personal toll caused by taking on the burden of this work.

As you may be aware, one of my priorities as president is equity, diversity and inclusion. As such, I am committed to engaging with the SFU community this fall about how to make SFU more inclusive and more just. My intent is to meet with equity-seeking groups from the SFU community to create space to hear concerns, thoughts and suggestions to move forward. I would like to meet with the SFSS BIPOC group to hear your perspectives. If you are amenable to this suggestion, please contact […] in my office to arrange a time to meet.”

Thank you again for taking the time to write. This work will not be easy and it will not be quick, but I am deeply committed to listening and taking meaningful action.”

Office of the President

While the BIPOC Committee appreciates Dr. Joy Johnson’s much needed response and willingness to continue conversation about equity at SFU, we still need to see an urgent commitment to action redressing harms that came with the SFU Athletics Name.

We need you to urge SFU to appropriately and urgently address the concerns brought forth by Black and POC athletes, movement organizers, and SFU community members.

Firstly, the SFSS BIPOC Committee wants to congratulate Black athletes for their successful advocacy and organizing! It is important that in this movement, we amplify Black voices without simultaneously contributing to Black erasure. The SFU Athletics name change is the direct result of countless hours, energy, and emotional labour of Black students and movement organizers. We also want to highlight the crucial role of allies such as students and athletes, SFSS Council, faculty, staff, and SFU community members. This is an example of a community organizing effectively to amplify marginalized voices so that the institution was forced to act.

In the North American context, people too often heard the ‘Klan’ instead of the ‘Clan’, being associated with the Ku Klux Klan. In SFU’s colour-blind statement, the history of the name was recognized for its good Scottish heritage and addressed with care. However, the Clan’s racist undertones and realities in North America were not acknowledged, despite it being the reason that Black people and allies called for change. The C[K]lan has a dark and terrorizing history in North America; The lack of attention placed on the North American context undermines the experiences of racism for Black people. The selective attention also reinforces colonial priorities, thus idealizing a Eurocentric framework where Black, Indigenous, and People Of Colour (BIPOC) are ignored, or at best, considered an afterthought.

Though we celebrate this achievement, we recognize that harm and labour was inflicted on Black students, particularly student-athletes, throughout the name change process. The adoption of the name is a direct result of systemic exclusion of Black, Indigenous, and People Of Colour in decision-making processes. The C[K]lan name put athletes and SFU members in unsettling – even dangerous – situations, as they were bound by this name that people misunderstood. Representing the C[K]lan was undoubtedly distressing for Black athletes, further adding to Black trauma. Moreover, Black athletes’ and allies’ calls were deliberately ignored by the SFU Administration as students were met with gaslighting and institutional racism.

Furthermore, SFU neglected their commitment to the Okanagan Charter, an international charter for health promoting universities and colleges, which was signed in 2015 by Petter as representation of the university’s commitment to protecting and advocating for the health, wellness, and safety of all students. The lack of resources allocated for Black athletes in response to the trauma caused by the previous team name, as well as the ignorance of this concern in Petter’s statement, directly undermines the commitment SFU made to protect students’ mental health and well being. In accordance with the Okanagan Charter’s guidelines, Petter had an obligation to allocate resources to students who experienced trauma, especially in an equitable manner. However, his ambiguous response resulted in no action taking place and SFU violating their commitment to student health and well being.

We urge SFU to appropriately and urgently address the concerns brought forth by Black and POC athletes, movement organizers, and SFU community members.

We Call on SFU to:

Dr. Joy Johnson, as the new Simon Fraser University President, these calls to actions are heavily applicable to you. It is your responsibility to uphold these standards and ensure BIPOC students, and especially Black athletes, receive the space and support specifically needed to amend the harm caused by SFU, as well as reform the systemically racist institutions in place.

We call on SFU to immediately redress this situation, and commit to tangibly fighting anti-Blackness and colonialism at SFU, through equitable policy and action. This name change is a big accomplishment for the Black community, but a small step in addressing institutional racism.