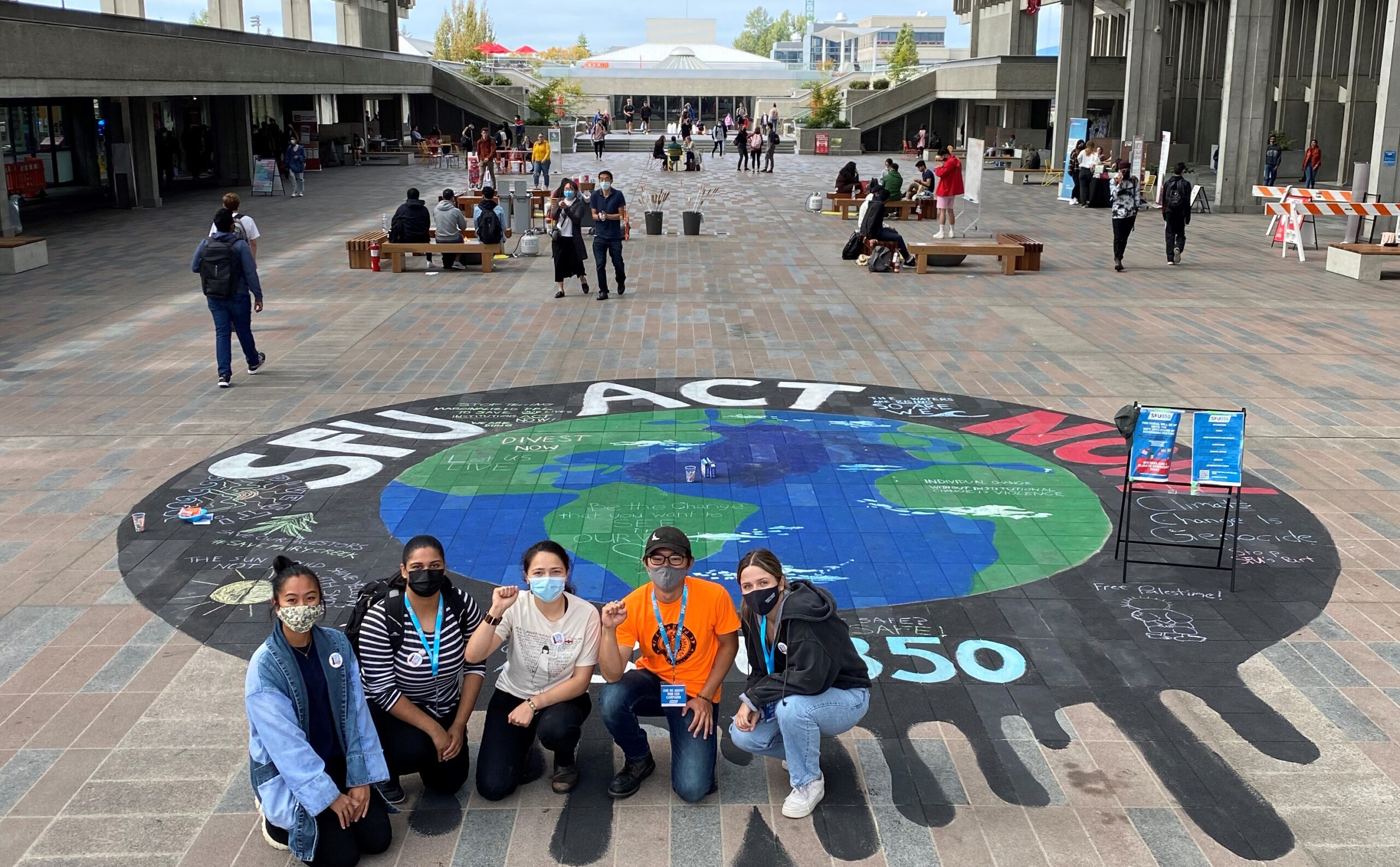 Late yesterday, the Simon Fraser Student Society (SFSS) Executive Committee learned of attempts by SFU’s Student Conduct Office (Office of Students Rights and Responsibilities) contacting students who participated in the creation of the climate justice mural at Convocation Mall with threats of disciplinary proceedings.  It is particularly troubling that this action has taken place on the day of the annual climate strike, when students should be granted academic amnesty.

Climate justice murals such as the one in Convocation Mall are wonderful cultural and protest demonstration methods that raise awareness about climate justice, the climate crisis, and in this case the conversation about divestment in fossil fuels.  Student organizations and 350 organizations across the country and worldwide have used tools like this to raise awareness.  This specific mural is a cultural expression that was created by many folks of all ages, from children to adults, students and non-students alike. It was specifically intended to raise awareness in advance of the Board of Governors’ September 28, 2021, consideration of a motion to divest SFU from fossil fuels.

We support this action and disavow the University’s weaponization of its student misconduct policy against peaceful assemblies and demonstrations. We stand in solidarity and fight alongside students to bring attention to the climate crisis and the calls for SFU to divest, and in support of students’ rights to peaceful protest and demonstration.

We learned of the threats of disciplinary action at a September 23, 2021 meeting, which we expected to concern the demands of the Climate Justice Mural and the Fossil Fuel Divestment campaign, and what we understood to be a shared commitment to keep the mural in place until September 28, 2021.  Shortly before that meeting, we received the linked letter at the very last minute. This letter is reflective of the reactive stance and lack of care that SFU administration has taken with students who have taken their time to add pressure and raise awareness regarding issues that directly affect them. Here is the letter that the SFSS sent in response to SFU’s letter.

We abhor SFU’s attempt to target individual students with “potential corrective and/or disciplinary action“. Any such action would have a severe impact on students’ democratic rights to protest, freedom of expression and peaceful assemblies.  The simple threat of this action is likely to have a chilling effect on freedom of expression by students, which runs counter to the long history of SFU’s tradition of protest and promotion of freedom of thought.

We have consistently communicated to SFU that this mural will in no way deface or damage any property.   The students involved used washable paint, and tested its permeability before engaging in their artistic process.  We also suggested to the University that we would assist it to undertake testing to ensure the mural can be removed.  We have yet to receive any request to do so.

It is a pity that the focus on the issue by the University Executive has moved towards policing students’ methods of protest instead of the actual significant issue that the mural raises: SFU’s significant investment into fossil fuel and the imperative divestment in the interest of climate justice.

We are in full opposition to SFU removing the climate justice mural before the SFU Board of Governors meeting on September 28. After this meeting, the SFSS and the students who have raised awareness with this mural, as communicated to SFU, will be removing the mural at no cost to the University.

If you have been contacted by SFU with respect to your participation in the mural, please reach out to us at the SFSS as soon as you can. Rest assured that the SFSS Executives will continue to fight and stand in solidarity with you in your peaceful demonstration for social justice and equity. We will be in touch.